Years ago on most of my early cruises they always served Baked Alaska on the Captain’s Night or some other elegant night for dessert. They still serve it BUT with one difference, it is no longer flaming. Yes, flaming. I remember the first time I saw this, the waiters all came dancing into the dining room holding a flaming Baked Alaska! It was quite the parade. But as with all wonderful things of the past, it is no longer a flaming performance. I guess they realized flames like that on a cruise ship can be very dangerous and stopped it, until recently! It has made a comeback on the Carnival Vista late 2017 and is expected to start returning fleet-wide this year, if not already! (see YouTube video at end of post)

Either way, the dessert is still very popular and unique though it’s not very difficult to make, it takes time. Lots and lots of time. So for a special occasion (and plenty of room in the freezer) it is worth it. This recipe also only calls for vanilla ice cream. On the ships they serve it with a Neapolitan type ice cream, vanilla/chocolate/strawberry.  That is a bit more extensive to do so one flavor of ice cream is definitely easier.

This recipe I found on many sites but the photos are mine. Now if I could just find a photo of a flaming one… Does this count? 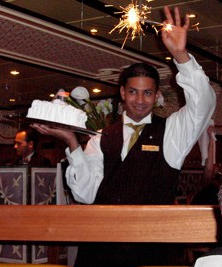 (Yes this audio on this sounds computerized. You get the idea though.)

This site uses Akismet to reduce spam. Learn how your comment data is processed.

It’s been a while since I posted but I’m back! I made this recipe for our Halloween Party at my new job. (Ok it’s not so new anymore) Everyone knows how much I LOVE to dress up (NOT!) so instead I made a dessert. Normally dessert is not my go to recipe realm but I […]

This recipe is from Gina at Skinnytaste. I had made them once before and they were good but I used whole wheat flour. This time I made them with unbleached all-purpose flour and they came out so much better! Each recipe makes 4 bagels and for those following Weight Watchers and counting points, each bagel […]

This post is from many years ago but since it is Cinco de Mayo I thought I’d repost it! Guacamole isn’t just for Cinco de Mayo either! Enjoy it every day if you want! Avocados are good for you! An update on the avocado “tree” I had all those years ago…It didn’t last. We don’t […]

I BAKED!! I know what you’re all saying…(But you don’t bake!) But I tried yet again, I refuse to give in on this. And it’s not really from scratch, it’s semi-homemade. I added my own touches and it worked! It came out amazing! So moist, rich and tropical! Oh and I even made the frosting […]

As promised I am posting the recipe for the French Onion Dip/Soup Pizza I posted pictures of the other day. This recipe came from Rachael Ray. It actually aired on her show back in 2009 but I just came across it now. If you want to see the video and original recipe click on French […]